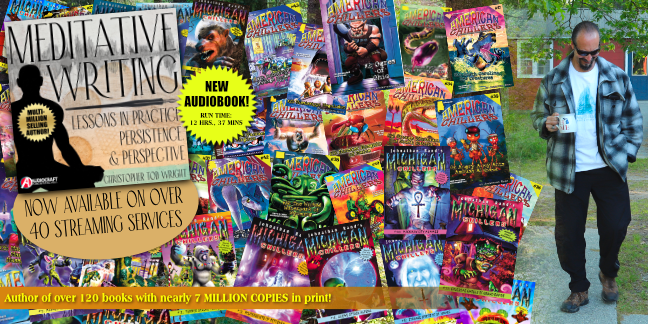 “Why do you need three names? Are you try’na hide out from the law?” -Josh S., 8 years old

Johnathan Rand and Christopher Knight are pseudonyms of Christopher Tod Wright, who began his writing career in 1983 at radio station WQON in Grayling, Michigan shortly after realizing he wasn’t cut out for college life. After writing/producing thousands of radio/television commercials and various narrations/voiceovers, in 1998 he released the self-published audiobook St. Helena, under his ‘radio name’ of Christopher Knight, followed by the novelization of the same book (1999) as well as another novel that same year, entitled Ferocity (AudioCraft Publishing, Inc.). It was during the writing of Ferocity that brought about the idea of the Michigan Chillers series. The first book in that series, entitled Mayhem on Mackinac Island, was published under the pen name of Johnathan Rand in March of 2000, followed almost immediately by #2: Terror Stalks Traverse City. An immediate smash success, 8 more books in the Michigan Chillers series followed within a year. In December of 2001 the first book in the American Chillers series was published (The Michigan Mega-Monsters), followed by the Freddie Fernorntner, Fearless First Grader series (2004). More adult novels followed, along with more children’s books and series such as Creepy Campfire Chillers (audio only), three books in The Adventure Club series (est. 2001), the Dollar $tore Danny series (2018) and the all-new Nightmare Nation series (2020).

So, why the pseudonyms?

Wright: “When I began writing novels, I had been on the radio in northern lower Michigan for almost a dozen years; I’d adopted the ‘radio name’ of Christopher Knight when I took a job at KHQ radio in 1987. I stuck with that name for my adult fiction, but when I decided to write books about and for kids, I wanted a ‘brand name’ that was completely different…so I came up with 'Johnathan Rand.' I know that can create a bit of confusion, but having the two names—one for adult fiction, the other for kids—keeps the two separate. Parents know that a book by Johnathan Rand is going to contain age-appropriate material for their children.”

Since releasing the Michigan Chillers in the spring of 2000, he’s traveled to over 2,200 schools and libraries across the US and Canada, speaking to students of all ages and presenting a powerful, influential message regarding the benefits of reading and writing. In 2005, he, his wife, and a small staff opened Chillermania, a retail store/corporate office and warehousing facility in Indian River, Michigan that’s open to the public and continues to welcome thousands of visitors each year. In 2007, he founded Johnathan Rand’s Author Quest, a four-day, three-night camp that was in existence until the covid-19 pandemic in 2020. The tradition of Author Quest continues in shorter classes and sessions for various age groups. He still actively writing, and remains very involved in the day-to-day operations of running one of Michigan’s largest ‘small’ publishing companies. Collectively, he’s written over 120 books with nearly 7 million copies in print.

In 2021 under his ‘real’ name of Christopher Tod Wright, he released a special ‘audiobook-only’ edition of Meditative Writing: Lessons in Practice, Persistence, and Perspective, (AudioCraft Publishing, Inc., run time 12hrs., 37 mins) a semi-autobiographical piece that takes the listener deep into the recesses of their own mind(s) to explore the wealth of creativity, imagination, and inner tranquility that’s available to everyone.